We are sure that you’ve wanted to be in two places at once, and experienced the frustration of not being where the action is. For people looking to get a glimpse of wildlife/animal this feeling is especially common.

And it’s the No. 1 reason to use 4G wireless trail cameras: they can be you eyes in the woods, farm,garden, showing you what you could have seen with your own eyes if you had been in that location at that time, and letting you know where to best focus your wildlife monitoring in the future.

1. The 3 types of night vision
i) Image intensification

I don’t know about you but when I hear the term ‘night vision’ it conjures up images of horror movie characters or special forces soldiers wearing suped-up goggles to evade detection.

Using a particular type of night vision, called ‘image intensification’, these ‘night vision goggles’ take in whatever low level of light there is present, convert it into electricity, intensify this electricity and then convert it back into light, producing a bright enough image for us to see.

Amazing stuff! But there are two flaws with image intensification…

First of all, it can’t capture color, since that information is lost during the conversion process (the familiar green color is added on by a filter because green is easier for people to look at for long periods than white).

Second, and the fatal flaw for us trail camera users, is that it only works in ‘low-light’ conditions. So for the ‘no-light’ conditions we often find ourselves in, such as forests, we need to look elsewhere…

A kind of night vision you use all the time you just never call it that. Think about when you’re using a regular digital camera to take photos in dark conditions, what does it do?
It creates an instantaneous source of artificial light, otherwise called ‘flash’, or ‘white flash’, which is ‘added’ to the scene, allowing the image sensor in the camera to capture what’s there.
Call it whatever you like, it’s great for taking photos with friends on a night out, or even on a camping trip in the woods. 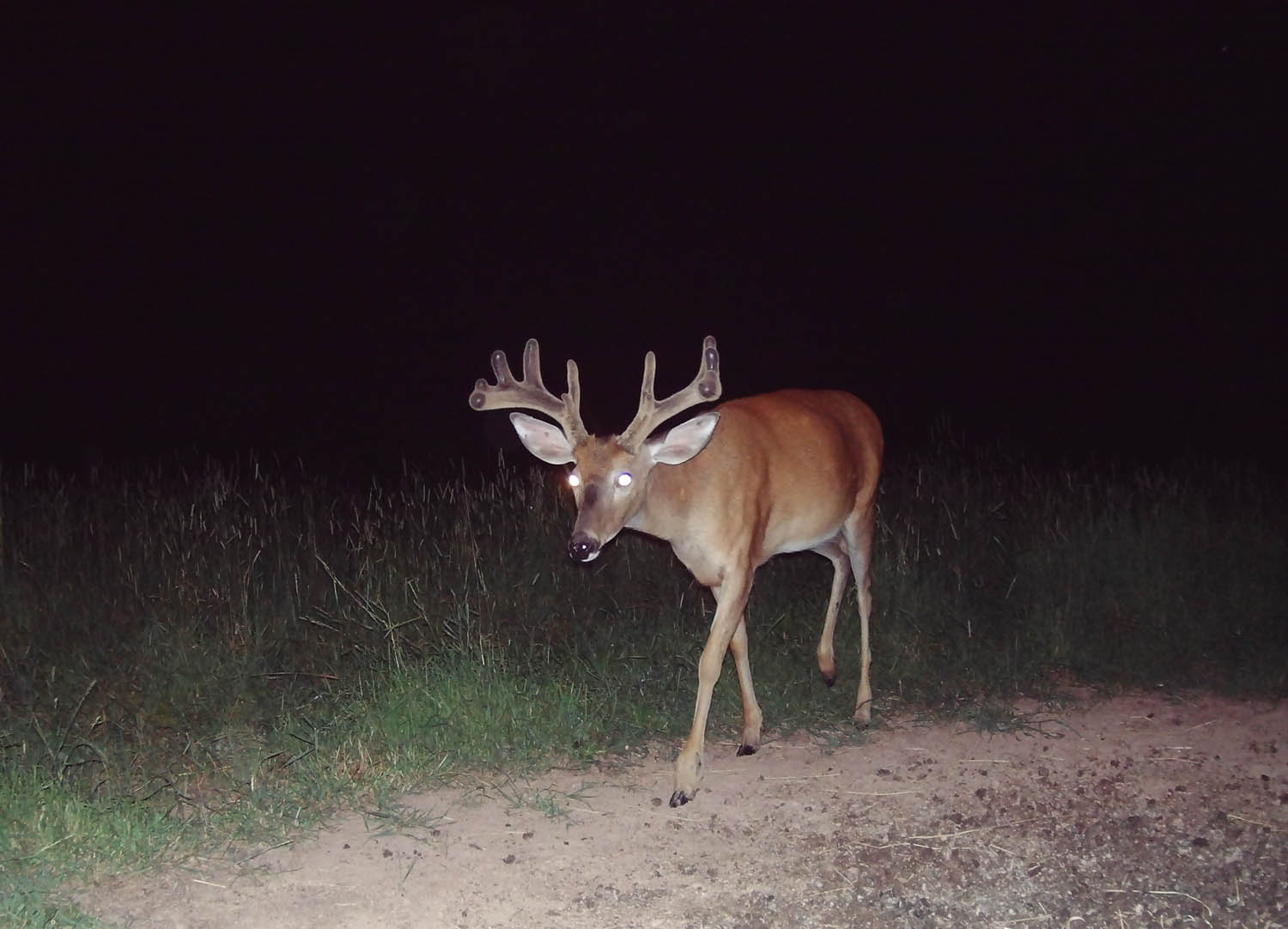 However, animals tend to be a bit less willing to stick around once they’ve seen it go off. Plus, it’s really an open invitation to any trail camera thief in the vicinity.

Which is the reason why, though you can find white-flash trail cameras on the market nowadays, they’re pretty rare.

Image intensification vs white flash
So our night vision choice so far has been: intensify the existing low level of light using image intensification, but then only be able to capture images in ‘low light’ conditions.
Or, add light to the environment, with ‘white flash’, but scare off animals and attract thieves.

Not a great choice, right? Thankfully though, you don’t have to make it. You also have a choice about the kind of light you add to the scene. This brings us to the final type of night vision… 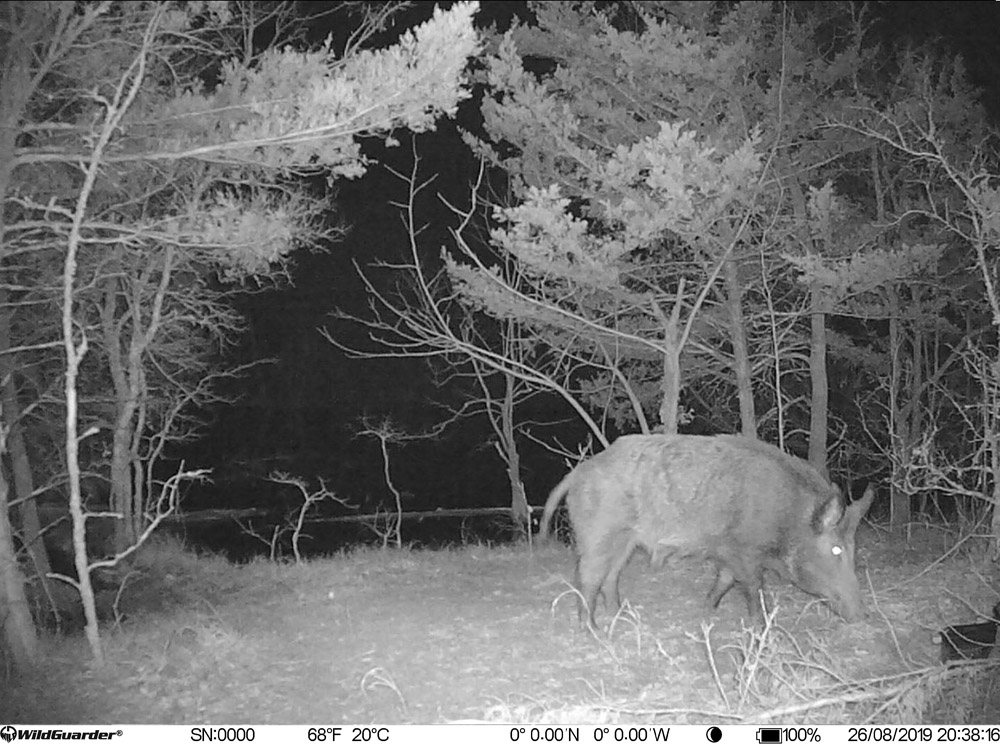 Thermal imagery
The kind of image normal infrared sensors pick up is called a thermal image, since infrared light and heat are given off simultaneously…

As you can see, thermal images aren’t great, not only because of the strange colours they produce to indicate infrared light intensity, but also because they’re extremely blurred.
This is because the natural infrared light living things give off just isn’t sufficient to create high-resolution photos.

Both of which produce a much nicer looking, higher resolution photo…

So I’m sure you’re asking by now, how do IR night vision trail cameras add this extra infrared light?
Take a look at the specs on a trail camera and you will see listed IR LEDs (infrared light emitting diodes). They’re just like the LEDs in lightbulbs and electronic devices, only designed to emit infrared light, as opposed to visible light.

Press your remote control to change channel and what do you see? A little light at the top, shining red? If so then this is a ‘low-glow’, sometimes more descriptively called ‘red-glow’, IR LED.
You can find the very same kind, only many more of them, in low-glow IR trail cameras. They produce that same feint red light because they use infrared light below 900 nm, very close to the lowest type of visible light, red.

While a low red glow is obviously preferable to a big white flash, they still carry the potential for scaring off wildlife and attracting thieves.
Therefore, for truly invisible night vision technology you need…

How to design an IR LED to give off no light at all? Simple, just up the frequency to above 900 and it will be invisible to animals and humans alike.
This is true ‘no-glow’, or ‘black-flash’ to contrast with ‘white-flash’, and represents the current peak in trail camera night vision technology.

So if no-glow IR is so great why are there still low-glow cameras on the market?
The fact is that the closer infrared light is to visible light, the better images it can create, which makes sense because we’re evolved to see visible light.

What this translates to for our purposes is that out of two cameras using the same number of IR LEDs, one with low-glow IR LEDs and the other with no-glow, the low-glow one will produce the higher resolution photos.

Balancing things out
This seems a difficult pill to swallow, that you have to sacrifice undetectability for better quality photos.
Fortunately, you can balance things out by choosing a no-glow IR trail camera with a large number of LEDs, producing more infrared light and therefore better quality images.

3. What type of IR trail camera to choose

So you’ve seen that if you want truly undetectable night vision that can produce good quality photos, you need to look for a trail camera with a high number of ‘no-glow’ IR LEDs.
At the point we’re almost good to go, however, there’s one more thing to consider… 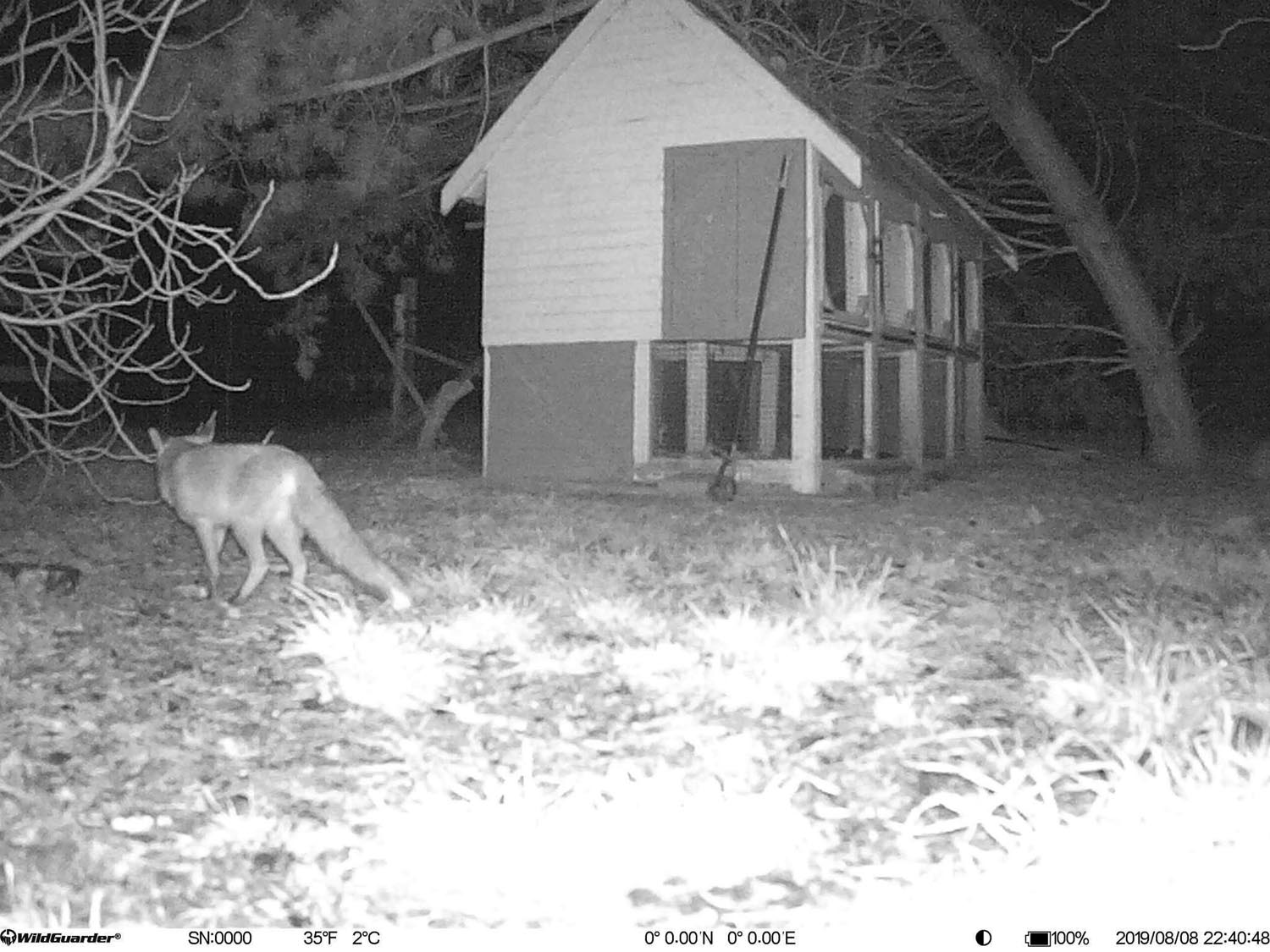 The white-out effect
You know you can’t take images when there isn’t enough light, whether that’s visible light for day photos or infrared light for night photos.
However, there is the opposite problem: too much light.

Think of regular digital cameras: in very bright conditions, they automatically reduce the the amount of visible light that can hit the image sensor, i.e. they reduce the exposure.
This ‘auto-exposure mode’ prevents a ‘white-out’ effect, in which the image is too bright for the details of the object to be clear.

The same goes for night vision in trail cameras. Night vision trail cameras with ‘auto-exposure mode’ adjust the exposure time according to how far the object is away from the camera, meaning that for closer objects less infrared light is shone back onto the sensor, thus avoiding the dreaded ‘white-out effect’.

So there you have it! I hope this article has cleared things up for you about what features the most advanced type of night vision trail camera available on the market today has:

And if you would like to take a look at an example of this type of trail camera, please visit our WildGuarder 4G cellular trail camera Watcher1-4G product page.

Also, feel free to email us with any questions you might have, and subscribe to our newsletter below for more useful trail camera information and all the latest WildGuarder deals.